WATCH: 2 companies own nearly half of the Ontario LTC homes worst hit by COVID-19

Almost a third of the Ontario nursing home residents who have died of COVID-19 were living at facilities owned by just two corporate chains, according to a Global News analysis of government statistics.

Sienna Senior Living and Revera Inc. long-term care facilities have lost 525 residents altogether, according to the figures. The data also shows that more than half the deaths at all nursing homes in the province were at facilities owned by six companies.

The province puts the number of nursing home deaths related to COVID-19 at 1,786 as of June 12. The data is self-reported by the long-term care homes to the province.

Canada’s long-term care homes have borne the brunt of the pandemic. In Ontario, more than 7,000 residents and staff have become infected, and almost three-quarters of those who died were nursing homes residents.

While there were outbreaks at several hundred care homes, a much smaller number suffered large-scale deaths — and most were owned by a handful of private companies. 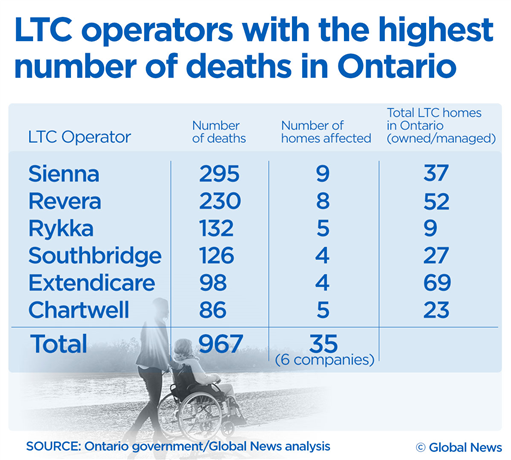 Using Ontario government figures on COVID-19 deaths in long-term care, Global News matched each home with an outbreak to its owner to see how they had fared during the pandemic.

The numbers only include deaths at homes that lost five or more residents, as the province does not release figures for care homes with fewer than five resident deaths.

As the largest owners, Sienna and Revera were particularly hard hit. Sienna homes have lost 295 residents to the pandemic, while Revera homes have seen 230 deaths. Many of their homes had no deaths or outbreaks.

Of the 14 homes that lost more than a quarter of their residents, three were Sienna homes, two were Southbridge homes and one was a Rykka home. Three were non-profits. At four Revera homes, at least 20 per cent of residents died.

“We have a very serious problem with long-term care facilities, but it’s not a problem that started with COVID-19,” said professor Tamara Daly, a professor of health policy and director of York University’s Centre for Aging Research & Education who has been studying the issue for two decades.

Ontario has the highest number of for-profit care homes in Canada, with 57 per cent of the more than 600 facilities owned or managed by for-profits, according to Daly’s research. In B.C. and Alberta, roughly 44 per cent and 40 per cent are for-profits.

For-profit homes generally had more part-time and casual workers, which can lead to a greater spread of infection as staff employed at multiple facilities move between workplaces, she said.

Non-profit and municipal homes tended to have higher levels of full-time staff, meaning support workers had a better understanding of the needs of those they were caring for, Daly said.

But the debate over private versus public homes is far from settled.

According to SEIU Healthcare, the union representing thousands of the province’s long-term care workers, for-profit homes had 7.2 deaths per bed during the pandemic.

Preliminary data from Ontario Long Term Care Association, however, said 85 per cent of privately-owned homes had no deaths as a result of COVID-19, compared to 82 per cent of not-for-profit homes.

A Sienna spokesperson said that while some of its homes were “hit by challenging outbreaks, the vast majority of our 70 residences across the country have experienced few, if any, cases of COVID-19.”

Natalie Gokchenian said in a statement that “having reviewed current information, I can confirm that the number of deaths as a percentage of outbreak beds is lower than that of other long-term care providers in the province.”

One of the country’s largest long-term care providers, Sienna operates homes in Ontario and British Columbia. The company reported profits of $7.5-million in 2019, down from $21.8-million in 2017.

At Altamont, the military reported “significant staffing issues” and underfed residents. Most recently, troops were sent to Sienna’s Woodbridge Vista, where 62 residents and staff are infected, and 23 have died.

“Since the beginning of the pandemic, we have worked closely with public health authorities and health-care partners to ensure all precautions, protocols and directives are in place and that we continue to have adequate supplies of personal protective equipment available for all team members,” Gokchenian said.

The company has launched a six-point plan that aims to improve operations and delivery of care, she said. “The action plan includes an immediate, company-wide review into our policies, practices and culture at Sienna led by former Deputy Attorney General of Ontario, Paul Boniferro.”

Revera Inc. owns and operates more than 500 seniors residences in North America and the United Kingdom. Its Ontario homes include Carlingview Manor in Ottawa, which has had 61 resident deaths, and Forest Heights in Kitchener, where 51 have died.

The company is owned by PSP Investments, a Crown corporation and the investment arm for federal public servant pensions. Revera is also facing two class-action lawsuits in Ontario and Alberta.

“Some Revera homes have suffered serious outbreaks, and the hearts of our entire organization go out to the families and friends of the people we have lost to this tragic pandemic and the staff who cared for them,” said company spokesperson Larry Roberts.

“There are many variables and factors that have played a part in why COVID-19 spread and affected some homes and not others, however objective data has not shown that ownership is one of them.”

Roberts said the company was “adapting and evolving our practices and protocols in accordance with the latest medical advice and public health directives.” He said Revera would respond to lawsuits against the company “in due course in the appropriate forum.”

“These are long-standing structural and capacity issues that, coupled with a severe staffing shortage that predates the virus, have led to the tragedy we have seen in our homes,” the statement said.

The union representing federal public servants wants PSP Investments to divest itself of Revera Inc. amid what it called “mounting and overwhelming evidence” of the “extremely disproportionate” rate of COVID-19 infection and death in long-term-care homes.

Homes run by Rykka, an operating partner of Responsive Management Inc., based in Markham, Ont., had 132 deaths at four facilities, the third-most in the province, the analysis of government data shows.

They include Hawthorne Place Care Centre and Eatonville Care Centre, where a military report said residents were left in soiled diapers and there was a “culture of fear” among workers worried about using supplies like wipes, gloves and dressing gowns.

Responsive Management said the company was spending all the money it received from the government on staffing, support services, food and supplies like personal protective equipment.

“Most of our homes managed to keep COVID-19 at bay and the rest have turned the corner thanks to the dedicated efforts of our staff,” said Linda Calabrese, vice-president of operations.

“Many of our staff members have been able to come back to work and we are seeing residents recover fully. We are hopeful that we can declare the outbreak over in our homes soon,” she said.

READ MORE: Long-term care facilities are the only option for many. What happens when they fall short?

Ontario’s worst-hit home was Orchard Villa, with 70 deaths. The company that owns the facility, Southbridge, had a total of 126 COVID-19 deaths at five homes, according to the analysis of government data.

“While the majority of our homes had no or very few cases, COVID-19 presented Orchard Villa with some unique challenges as one of the homes that went into outbreak early,” company spokesperson Richard Franzke said.

“The guidance and recommendations from government and health authorities evolved since then, which ultimately enhanced the support for the sector. The home also experienced staffing shortages as a result of COVID-19. To address our staffing needs, we reached out for help early and often.”

“Nothing is more important to us than the residents in our care, and we want to ensure that we are always meeting or exceeding our commitment to providing the highest standard of care.”

Sharleen Stewart, president of SEIU Healthcare, said private homes received the same provincial funding from the provincial government but also had to generate profits for shareholders, meaning there was less to spend on staff and supplies.

“Even before COVID we could see the difference from the staffing perspective,” Stewart said. “The workers were telling us how different it was in those homes, and as you know, they do work in more than one.”

“It’s pretty glaring that the for-profits have got a real problem.”

She said the union is calling for an inquiry into what happened.

“It’s not to point fingers. It’s to identify what didn’t work and what worked. I mean, look at the municipal homes and the not-for-profits, they have better outcomes, and they have the same issues.”

The Ontario Health Coalition said staffing was a key factor in the pandemic.

In April, the staffing crisis worsened when employees were banned from working at multiple locations in order to curb the spread of COVID-19, forcing them to choose a single home.

Many chose not to work at for-profit homes, which generally offered worse wages, benefits and working conditions than facilities operated by non-profits or municipalities, said executive director Natalie Mehra.

She said the coalition’s research had discounted factors such as the number of beds operated by owners and the acuity of the resident population as a measure of how homes had coped with the pandemic.

“And so the bottom line is it is now irrefutable that the for-profit homes, the larger chains, in particular, have a strong correlation with the highest death rates of COVID-19 in our province.”