In May 2018, when the Roseanne reboot was hailed as the highest-rated sitcom on TV after its first season, Barr tweeted a comment — which has since been deleted — about Jarrett. (It can be seen in a screengrab below.) 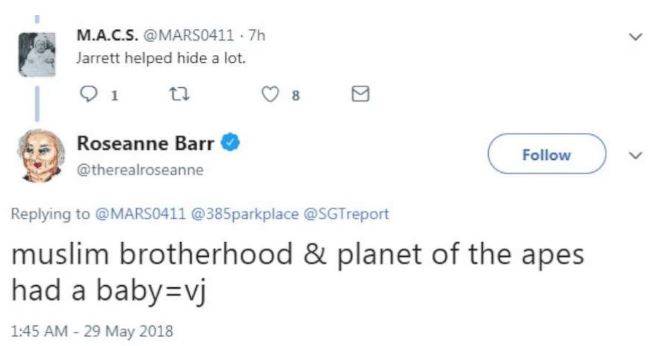 Barr attempted to apologize, claiming that it was a “bad joke” and that the tweet was a result of her “inebriated condition” caused by mixing Ambien and a “couple of beers.”

Now, the disgraced comedian claims that she was really fired because the former first lady went to Dungey and asked her to let the actress go.

“(Michelle Obama) said: ‘This tweet is unforgivable.’ That’s what I was told, and I tend to believe it because the woman who fired me is now working with the Obamas at Netflix,” Barr told British newspaper The Times of London.

The Obamas have signed a “multi-year agreement to produce films and series” with Netflix, and Dungey, who left ABC in December 2018, has moved to Netflix as vice-president of original content.

Barr acknowledged that she wished she hadn’t posted the tweet about Jarrett, but she argued that her comments were taken the wrong way.

“Of course, I’ve apologized because this was an insensitive comment, but really its damage was in the way it was perceived,” she said. “I can’t be responsible for the way people perceive things. People have always done this to me. They don’t get me.”

WATCH: Roseanne Barr in interview — ‘I made myself a hate magnet’

She continued: “I don’t just like to make people laugh. I like to (tick) them off and make them think, too. I’m a provocateur… It’s like the PC police. It’s about mind control. Everyone in America is under mind control from television, except for my show — that’s why they got rid of it.”

“I should have written it backwards,” she said of her Jarrett tweet. “It came out dyslexic. It should have been, ‘Valerie Jarrett’s ties to the Muslim Brotherhood have now allowed Iran’s government to remain, as in the movie Planet of the Apes.”

Barr said that ABC threatened her right to free speech by firing her. She called the network “total Stalinist censorship.” Barr shared that ABC told her if she did “one more thing they don’t like, they’ll remove (Roseanne) reruns forever.”

She said that ABC only wants “pliable servants.

She also thinks that politics and her support of U.S. President Donald Trump became an issue for the network.

She called Trump a “genius” and a “real deep thinker.”

“Part of why I love Trump is that he took so many of my ideas,” she said.