Mere weeks after Roseanne Barr said that she wouldn’t be doing any more TV interviews following her racist tweet and subsequent cancellation of her rebooted sitcom, the disgraced comedian sat down for a televised chat with Fox News’ Sean Hannity on Thursday.

In late May, after the Roseanne reboot was hailed as the highest-rated sitcom across TV after its first season, Barr tweeted a comment (now deleted) about former president Obama aide Valerie Jarrett. (It can be seen in a screengrab, below.) 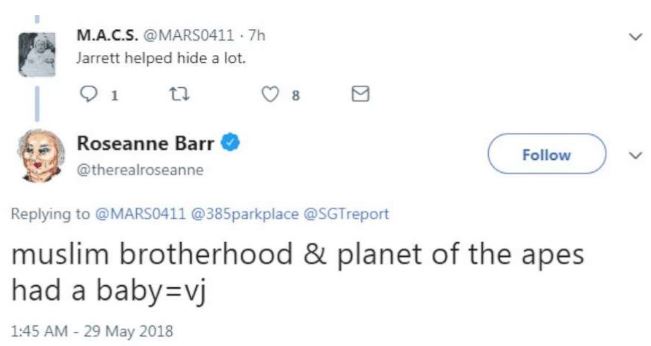 Aside from the racist aspect of the tweet, the assertion that Jarrett has a connection to the Muslim Brotherhood, which she does not, also sparked intense anger on social media.

Amid the backlash, Barr followed up with an apology.

“I apologize to Valerie Jarrett and to all Americans. I am truly sorry for making a bad joke about her politics and her looks. I should have known better. Forgive me-my joke was in bad taste.”

Jarrett responded to the controversy ahead of a town hall on MSNBC focusing on “Everyday Racism.”

“I think we have to turn it into a teaching moment,” Valerie Jarrett told NBC News. “I’m fine, I’m worried about all the people out there who don’t have a circle of friends and followers who come right to their defence.”

Barr continued to make excuses for her tweet during the interview with Hannity.

“I was hacked,” said Barr, 65. “I’ve apologized a lot. It’s been two months. I’ve apologized and explained and asked for forgiveness. I was so sad that people thought was racist. And I went into the whole discussion of racism, and that blew my mind because it was so much what the show I was doing was about. Why couldn’t they see my work?”

Barr reiterated that she has extended family members who are black, a fact she has repeatedly pointed out since the tweet.

“The thing that broke my heart the most is that I have African-American children in my family and in my loving circle,” she said. “I’m so sad that anyone thinks that of me, but I’m not that person. I was going through a very hard time… I didn’t . I made a mistake. It cost me everything, my life’s work. I wish I worded it better.”

“Let’s talk about it. Let’s really turn this into a teachable moment,” she said. “We need to talk about race and everything that’s connected to it. Her skin tone is like mine and I’m brown,” Barr said. “I didn’t know she was African-American. I assumed because she was from Iran and she lived in Iran for such a long time. If she’s watching, I’m so sorry you thought I was racist and you thought that my tweet was racist because it wasn’t. It was political. I’m sorry for the misunderstanding that caused my ill-worded tweet. I’m sorry that you feel harmed and hurt, I never meant that. For that, I apologize. I never meant to hurt anybody or say anything negative about an entire race of people. My 30 years of work can attest to that.”

WATCH BELOW: Roseanne Barr: ‘I made myself a hate magnet’

“Plus, I’d tell her she needs to get a new haircut,” she quipped.

So can the public expect more tweeting from Barr? She said no, and that her kids had taken her Twitter account away from her.

“My kids took it away from me forever,” she said.

As for her former TV show, Roseanne is being rebooted as The Conners. Not much is known about its new incarnation yet, but the series will feature the rest of the sitcom’s cast — minus any involvement of its outspoken matriarch.