WATCH ABOVE: For the first time in Winnipeg Jets history, the team is advancing to a conference final. Canadian hockey fans are now pinning their hopes on the Jets to win the Stanley Cup, because a Canadian team hasn't won the big prize in 25 years. Joe Scarpelli reports.

If you were hoping to score one of the free tickets to the first two Whiteout street parties of round three in Winnipeg, you might be out of luck.

With the Winnipeg Jets securing a spot in the Western Conference Final, demand for entry to the street party is expected to increase significantly.

It prompted Economic Development Winnipeg and True North Sports and Entertainment to move to a ticketed based entry to “ensure the site remains safe, secure, and enjoyable for everyone,” according to the organizations.

“For us, it’s really about predictability,” Winnipeg Police Service Insp. Dave Dalal said. “We need to plan our operations for this party, and still maintain operations on the street. Every citizen still needs that police car to come.”

Tickets went up online at 12 p.m. Friday and within 90 minutes there were none left.

Just hours later, tickets for Monday’s game also were all spoken for.

True North then released 2,000 more for each game and those were quickly scooped up as well.

While the hope is that everyone who secured a ticket, uses it, organizers said if the party is not at capacity those without a ticket still might be able to get in.“By having a number that’s predictable, we know how many officers to staff the event for,” Dalal said.


Economic Development said it is still working through plans ahead of Saturday’s game and understands some people who snagged a ticket might not end up being able to use it.

“We understand life gets in the way,” Matt Schaubroeck said. “We are still in the process of working it all out.”

However, within minutes of tickets selling out online, some popped up for sale on other resale sites. 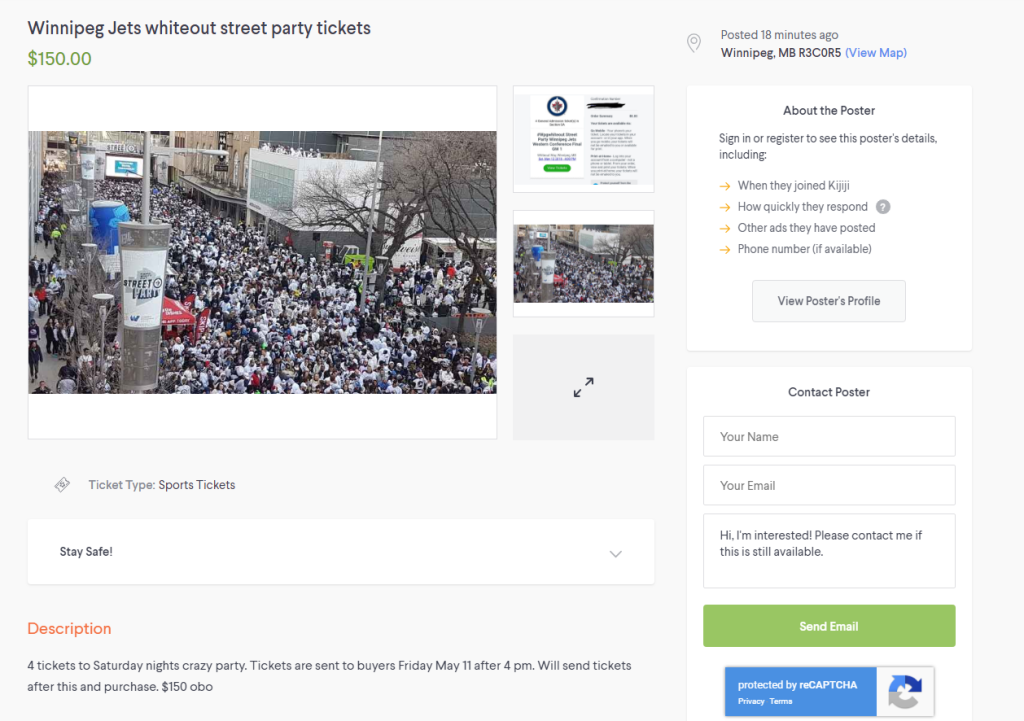 One Kijiji user said they had four tickets to sell but were asking $150.

Winnipeg police said they are aware of the tickets being advertised for sale and reminded Winnipeggers that ticket scalping is illegal.

“Ticket Scalping is the practice of buying tickets to an event and reselling them for more than the original cost,” police said in a release. “Enforcement is regulated under City of Winnipeg By-Law #125/2006 and Provincial Legislation under the Amusements Act.”

Police also reminded the public to take every precaution before paying for free tickets.

Economic Development and True North said they are trying to determine if any action can be taken to stop those tickets from being sold.

The organization said moving to a pre-determined street party capacity, achieved through ticketing, will allow “organizers to eliminate the variables of larger-than-expected crowds and to assess more accurately the necessary resources required to keep the street party a safe and enjoyable experience for all fans.”

There are no tickets available for free download anymore.